In 2012, I participated in the Houston 48 Hour Film Project with a colleague of mine, Dan Ko, and a group of students from the Art Institute of Houston. The parameters of the competition were to write, shoot, and edit a 7 minute film in just 48 hours. We also had to meet certain narrative criteria given at the beginning of the 48 hours to insure that the work wasn’t preconceived. The name of the game is to go into the competition with as many resources as possible. Many teams have a fairly complete “script” that they merely adapt to narrative criteria.

We, however, conceived our story after the criteria was given. I wanted the criteria to be well integrated into the conflict of the story. I didn’t want it to feel thrown into the exposition as many films do. Our core team had met several times to practice coming up with story ideas using randomly selected criteria that we’d made up. It helped settle the collaborative communication and how everyone’s ideas were welcome. Winning the screenplay award was something I secretly wanted. A great film starts with a great story. Here is the narrative criteria we were given at the competition and had to incorporate:

Prop: a briefcase
Character: Jacob (don’t remember the last name) who is a cook
Line of Dialog: “Here’s where it gets tricky.”
Genre: Western (or musical)

The genre was drawn from a hat of about 10 or so options. We could have gone with either western or a musical or both. Our collective efforts to concoct a story yielded western. I wrote the script from about 9pm Friday night until 6 am the next morning.

I’ve been developing a more coherent approach to narrative design and wanted to put some of the strategies I’d been teaching my students to practice. A short film requires a simple and situational conflict along with a well crafted reveal. I wanted to break the audience’s expectations and reveal the conflict to be other than they expected. This required using misdirection and a few well planted questions that have unexpected answers.

Check out the film and then I’ll take us through the narrative design:

The entire film is exactly how it was handed in 48 hours after starting the competition. The sound recording and design was less than polished. And in post production, it got the least attention. Dan Ko did an amazing job at editing the film. I appreciate how well it followed the script, yet still managed to incorporate more of the story going on between the lines.

Okay, let’s talk about the voiceover first. Voiceovers are considered un-cinematic. They are expository by nature and often stand in place of meaningful images. My approach to using voiceovers is to use them to change the context of the image. They should add meaning. In this short film, the voiceover serves as part of the strategy of misdirection. The protagonist of the film is the narrator, Jacob. But we are introduced to the Widowmaker first. Jacob’s voiceover informs the audience that we haven’t met the protagonist yet. “Who’s this woman then?” A ripe question I wanted to plant in the audience’s mind. That was part of the reveal I wanted to set up. Nothing that Jacob says in the voiceover has any primary narrative use. It’s that he’s narrating that has the narrative value. 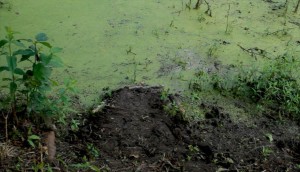 We begin here, at the bog. And there were really alligators here. Really, really. I wanted to plant a question in the audience’s mind, “What is this place and what is this woman doing here?” The answer to this question comes as part of the reveal in the end. Narrative questions need to directly address some relevant aspect of the conflict: character (who), objective (what or why), and/or opposition (what’s in the way)? Here, I was focused on establishing a question about why this woman was here, her objective. It’s why she was here that changes our understanding of the conflict later.

The next thing I wanted the audience to focus on was the saddle-bag (briefcase in the old west). I used the camera to feature this woman walking through the prairie so that the saddle-bag was clearly the center of attention. “What’s in the bag?” That ends up being the big question driving the conflict in the narrative. The character Mike certainly found himself fixated on that question, and paid for it. Because the storytelling clearly directs attention to these questions, the audience tends not to wander off asking irrelevant questions about who knows what. Visually speaking, I wanted the audience to be clear, this bag is important to the woman, and the story.

…and the shovel, but we’ll come back to that. Foreshadowing, okay yeah. But the grave is filling in some of the blanks in the audience’s mind, “why is she there?” and then leads them to ask another question, “who’s grave is that?” The bag and the grave are narratively connected, it all ends up being a part of her deception. Her rouse needs to be as much of a con on the audience as it is on Jacob and Mike. But it does so by leading that audience to empathize with the woman. We interpret her placing the flowers on the grave as a touching moment of lose, but really she’s dressing the set. Then this shot pans to reveal Jacob and Mike. “Who are these guys?”

So the trick is to misdirect the audience with a clearly defined conflict before completing the reveal. My hat to Michael Marlow, who played Mike. He really committed to the animosity between he and Kyle Firmin’s character. Michael’s ad lib “Sad man that depends on this’n!” and Dan’s astute editing really made the tension between them take center stage. Here’s where the story sets the audience up for a narrative assumption: damsel in distress (conflict: character.) I wanted the audience to assume the Widowmaker was more likely to be the victim. And because Jacob’s character makes the same assumption, standing up to defend her against Mike, the audience accepts this conflict without question. “Will Jacob protect the woman from the greedy Mike?”

Okay, so the moment played out quite obviously. We all saw it coming. Why would Jacob turn his back? Well, he’s naive right? That’s part of the reveal later, just how naive he is (was.) Dramatic Irony means that the audience knows more than the main characters do. We see it coming and emotionally commit to a reaction! And as long as that conflict plays out, the audience is not going to question their assumptions. And the questions related to the bog are in the back of the audience’s mind. We want to know what Mike wants to know too, “What’s in the bag?!” Jacob then watches in horror as the rest of the scene plays out, giving the voiceover a bit more context. He’s lamenting his mistake, the entire voiceover is now about seeking forgiveness for his mistake. But we still think its about misjudging Mike! We think we’re about to witness Mike heinously murder the woman. 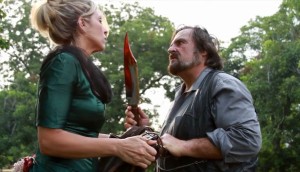 And so I escalate the conflict with the expectation that Mike isn’t finished getting what he wants. If there’s one thing Hitchcock has to teach about storytelling, it’s that tension comes from delaying the answers to the audience’s questions.

There’s even a little sexual tension thrown in to add to the damsel’s distress. By this point, the audience is hopefully committed to wanting the woman to escape and justice to come to the villainous Mike. But first, let’s see what’s in the damn bag!

She does what we all wanted her to do, give Mike what was coming to him. But then there was a snake in the saddle-bag?! And what’s with her wild shift in behavior?

Okay, the snake in the bag wasn’t so clear. In my mind was a shot of him reaching into the darkened interior of the bag and finding the coiled snake just at it strikes. She’s dressed in green like the bog. She’s really the coiled snake waiting to strike. There’s all kinds of metaphor and motif going on up in here. But we had to make do with the cliche stock sound of a snake hiss and Michael explaining “…there’s a fuckin’ snake in there!” Never the less, her sudden change from damsel-in-distress to crazy lady hopefully keeps the audience’s attention from the cheaper moments. 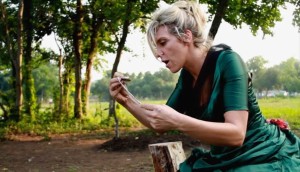 Jacob watches helplessly as it’s revealed what he was so wrong about. The woman shows her true nature as she rifles through Mike’s corpse for valuables. Her objective at this point is unequivocal. And this is where the audience’s mind reaches back into the story they formed in their mind for clues to their mistake. And there’d better be clear clues, or the audience won’t forgive you. You can’t lie to your audience. The facts you present to them must always be honest. They must discover how they, the audience, made the mistake themselves! They assumed she was something else! And so did both Jacob and Mike!

So we return to the bog for an answer to why she was there in the beginning. One short lesson from the George Parker school of rubber snake acting and we had a shot. Courtney Lomelo is a talented actor and she made this very convincing (like the rest of her work in the film) in all of two takes. And she scored the Best Actress Award for her excellent performance. This moment closes the opening question, tying together the bog, the bag, and her objective. And with that closing, the audience ends their own journey as they ponder what they witnessed. The conflict has completed.

The final scene reveals the graves have multiplied and we’re in on who’s in those graves, setting up more dramatic irony. This poor bastard, chewing on stale saltines spooned from a faux wood bowl has no idea what he’s in for. (cameo by yours truly.)

Hopefully, we leave the audience with a little chuckle.

The really challenging part for me, in putting this together, was that I never got to experience how this narrative actually operates. I could only theorize and rely on experience to guesstimate how the audience would respond. Would they ask the questions I wanted them to focus on? Would they make the assumptions I was hoping for? Would the reveal break their expectations? I was happy to find that audience’s responded well. These narrative strategies work. We scored the Audience Choice Award and the Best Use of Prop. Alas, no screenplay award though. Maybe next time.